After the ceremony of launch of the works by the Minister of Urban Renewal, Habitat and Living Environment on March 15, 2018 in Baraka, the final adjustments are being made to start the actual construction.
In order to facilitate the movement and supply of the site with sand, cement, iron and other inputs, it is planned to move 26 households to the east and west of the construction site. SOREBA, a construction company is currently studying the case to see how to relocate these displaced populations in relation to the steering committee of the project « Cité Baraka ».

People are in a hurry to see their dreams become a reality.
This is motivated by a fire that ravaged the house of 2 households located in front of the primary school which part of the houses were bamboo.

These were the houses of Madame Fatou Sy and Fatoumata Sangaré. These two ladies are neighbors and the origin of the fire is unknown because no investigation was conducted.

The fire took place the night of 9 to 10 April 2018 and fortunately no loss in human life but the material damage is enormous. 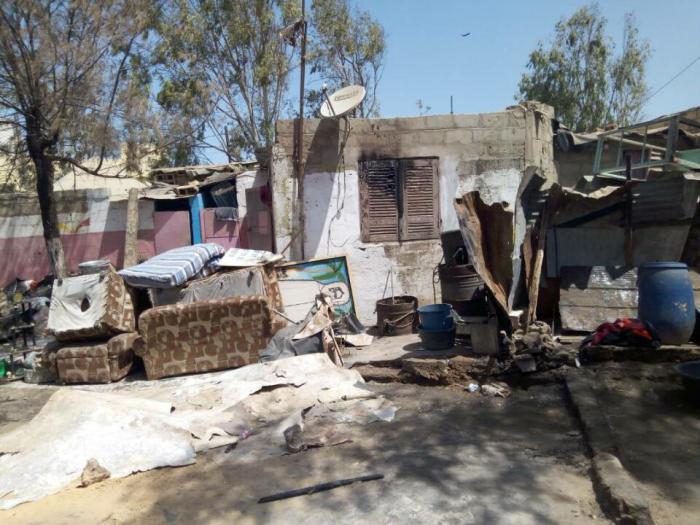 All the small household appliances, furniture, beds, kitchen equipment and gas bottles were washed away.
The solidarity of the inhabitants of the neighborhood allowed the two ladies and their children to have clothes to wear as was the case for this lady above. 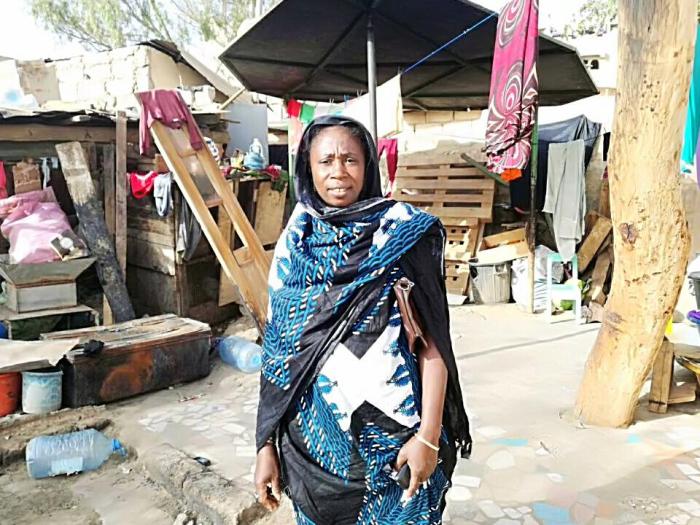 Construction work has finally started in Baraka with the ceremony of launching the works by the Minister of Urban Renewal, Habitat and Living Environment this Thursday, March 15, 2018 in Baraka.
This ceremony was attended by all the members of the « Baraka Steering Committee », the YOU Foundation with Blonde Mom and Mrs. Claudia Jerger, Casa Orascom with Mr. Stefan Zingerle and Mr. Alex Calderoni, Ambassadors of Italy and Italy. Germany in Senegal, the Director of UNESCO in Dakar, the Mayor of Sicap Liberté, the team of HOPE’87 Senegal, a local partner of YOU Foundation and the people of Baraka.

The ceremony was marked by speeches of gratitude, prayer and thanks. 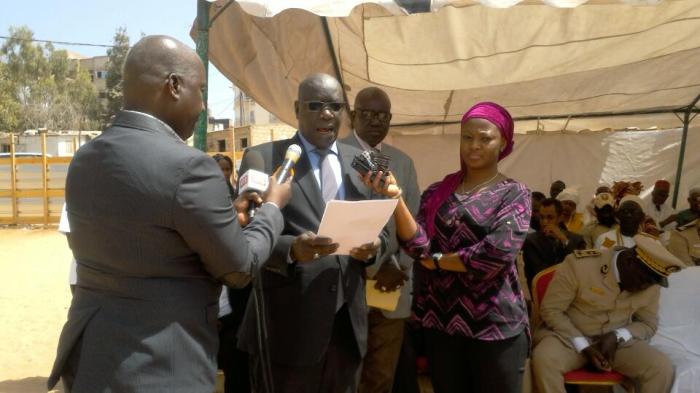 Minister Diène Farba Sarr said in his speech; « … as part of the implementation of this path that is part of the urban renewal program, the Head of State of Senegal has taken all necessary measures for the effective conduct of this project … ».

The YOU Foundation by the voice of Mrs. Ohoven thanked Mr. Samih Sawiris his partner in this project, the Head of State of Senegal Mr. Macky Sall who believed in his project and supported it, the Steering Committee of the project « City Baraka » and the Minister of Urban Renewal and Living Environment Mr. Diene Farba Sarr.

The district chief and the Mayor of Sicap Liberté thanked the YOU Foundation partner but also the state of Senegal for the implementation of this « New Baraka » project.

The objective of this project is to restore the human dignity of the people of Baraka who lived for a long time in this precarious neighborhood.

The dream of « Blonde Mom » ​​for these populations finally becomes a reality for her but also for the people of Baraka. 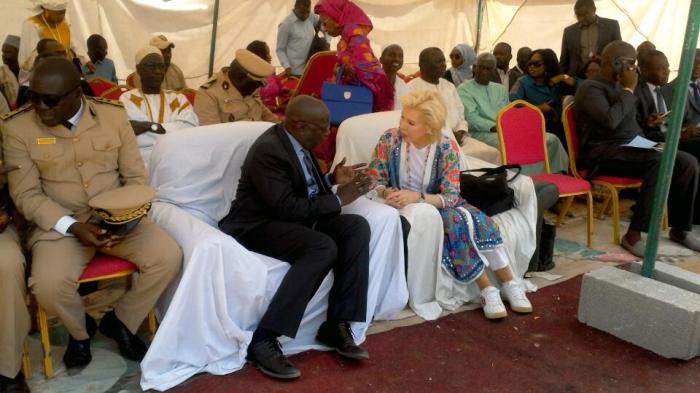 The construction works will finally start in Baraka on the basis of the preliminary works of the architecture students of the Düsseldorf School of Art Peter Behrens and the Association of German Architects.

Baraka will completely change its face, the master plan, developed by German architecture students for a new district related to the needs of the population, « Baraka New » will open not only to its neighbors, but also to the outside .

A lottery was organized in September 2017 at the Town Hall of Sicap Liberté to choose the type of apartment and rules to read. And every family or representative with their national identity card was present for the draw. The lottery consisted in making the draw depending on the building and the number of the apartment

A symbolic signing ceremony of the contracts of provision was organized on February 05, 2018 at the Sicap Liberty Town Hall in the presence of the YOU Foundation with Mrs. Ohoven and Claudia Jerger, Casa Orascom with Mr. Stefan Zingerle of the Ministry of Urbanism with Mrs Soumaré Technical Advisor of the Minister and the representatives of the population as well as notables.
This is a « Housing Provision Agreement » signed between the beneficiary and SOREBA (Baraka Reconstruction Society) represented by its Managing Director Mr. Stefan Zingerle. 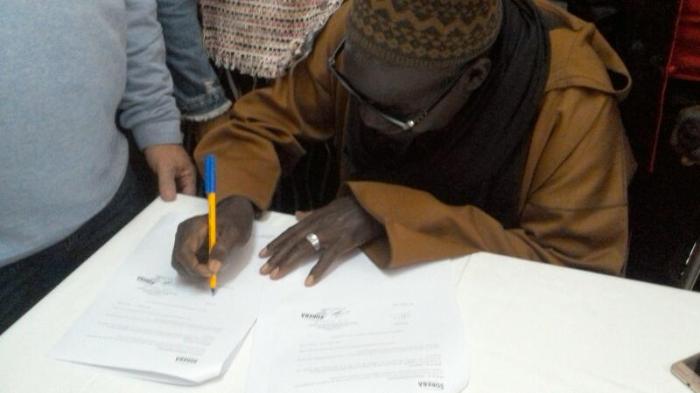 The duration of the agreement is 15 years for all lessees and the amount of the monthly special compensation to be paid in return for the provision differs according to the type of apartment (F1, F2, F3 and F4).
For the first time in their lives, these populations will have a document certifying that the apartment they occupy will be their property after 15 years of rental.

The architectural plans are in the final phase and the start of the works is officially scheduled for March 15, 2018. The safety standards of the trail by the zinc fence of the construction site began to be installed at the football field in Baraka.

A manual describing the whole process of reconstruction called « Cité Baraka » is being developed to be popularized or duplicated in the future in other horizons of the world for another slum reconstruction project. 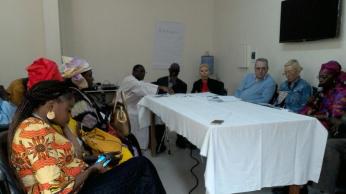 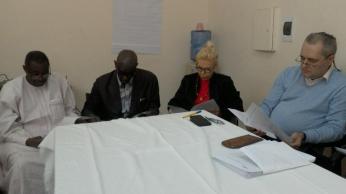 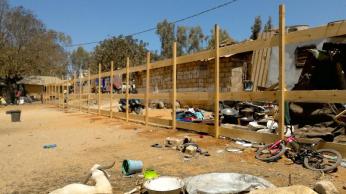 Mrs Ohoven and her daughter Claudia have made another 10-day stay in Senegal from 30 to 7 February 2018
As usual « Blonde Mom » ​​is always with his family in Baraka that is close to his heart during his various visits to Dakar to follow his actions in joy.

This time again « Blonde Mom » ​​is in Baraka with partners to please the children of the primary school.
As a reminder, this primary school was recognized by the State of Senegal in 2012 thanks to the support of the YOU FOUNDATION in this case « Blonde Mom ». 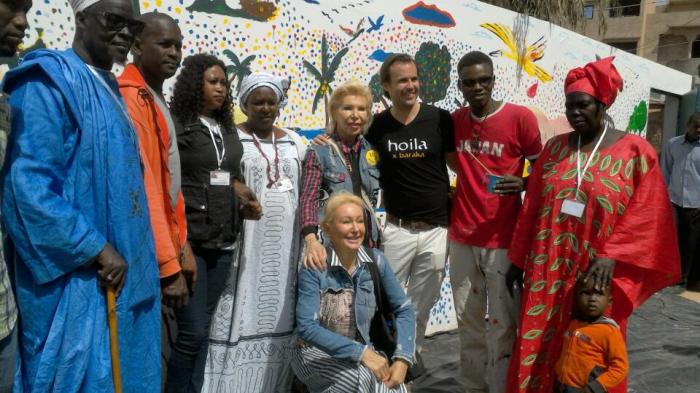 The YOU FOUNDATION and its partners first practiced a recreational activity by painting with various drawings of the inside wall of the school with the participation of all elementary school students, teachers and committee members piloting of Baraka. 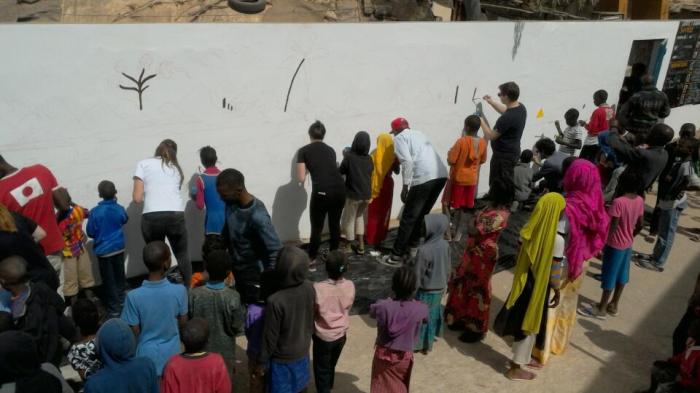 This activity was made in an atmosphere of celebration, joy and joy !!!

Then gifts were given to the 210 primary school students and 90 children in the Baraka neighborhood to the delight of students, teachers and parents.

The Christmas tree brings together children in a spirit of conviviality and sharing.
For this Christmas is a magical event in the year. And every child in the world, especially Baraka, is waiting for a gift from his parents or relatives
The people of Baraka have decided to support the actions of « Mama of Blonde » for the youngest in their own way.

As a reminder, the YOU Foundation with Mrs. Ambassador Ohoven decided to rebuild the district whose project is called « New Baraka City » to improve the living conditions of the people of Baraka.
The YOU Foundation has decided to support the construction of a nursery school whose work is underway to prevent children from spending all their time playing in the neighborhood away from parental supervision.

The animated ceremony had allowed children, parents and friends to spend a warm moment with the « fake » Santa Claus and local artists.
All the children were thrilled and very happy to receive a gift! 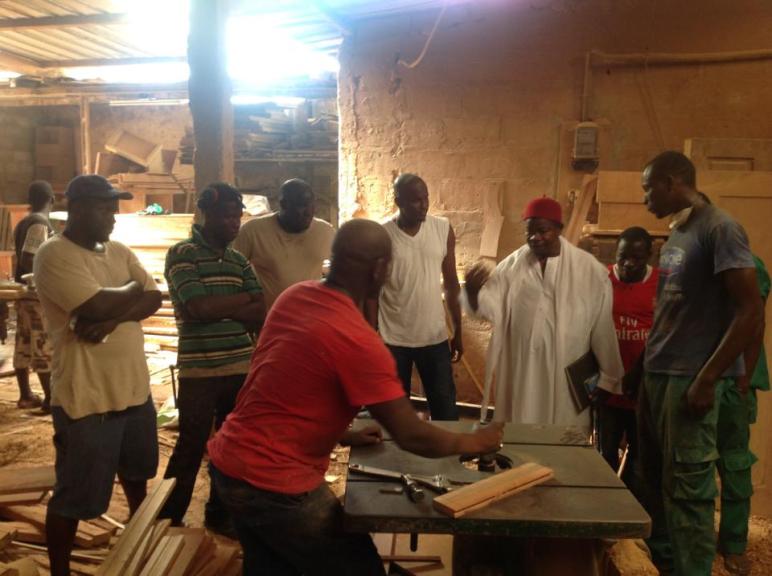 Youth unemployment in Senegal, and particularly in Baraka, is due to the lack of their skills and professional experience, as well as to the inadequacy of the profiles presented and the needs of the labor market.

END_OF_DOCUMENT_TOKEN_TO_BE_REPLACED

We often hear « it takes a lot of money to start a business »; it’s wrong. There are many ways to create your own project. This is what the YOU FOUNDATION understood by putting in place a strategy to help Baraka artisans, especially women traders and processors of local products.

END_OF_DOCUMENT_TOKEN_TO_BE_REPLACED 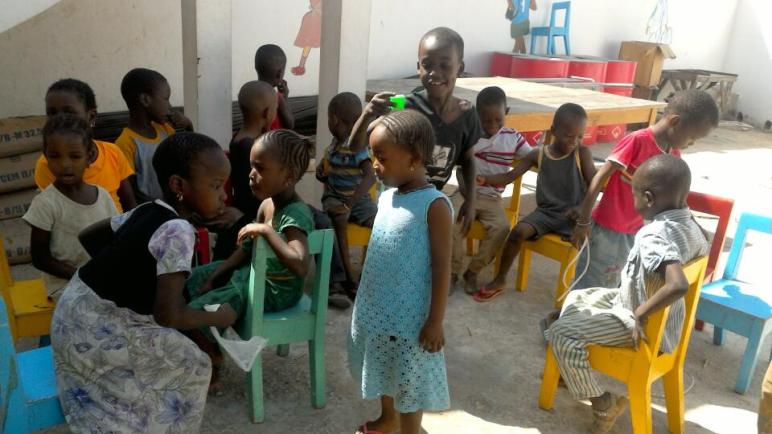 The Foundation wants to ensure the well-being of children in Baraka by building a nursery school.
The Foundation for the OMNITEST project, the German company well known in Germany and the AGFUND (Arab Gulf Program for Development)

END_OF_DOCUMENT_TOKEN_TO_BE_REPLACED

During her visit to Senegal from 10 to 19 September 2017, Ambassador Ohoven was accompanied by the very famous young 19-year-old painter on behalf of Leon Löwentraut, her family and the German gallery owner Dirk Geuer.

END_OF_DOCUMENT_TOKEN_TO_BE_REPLACED 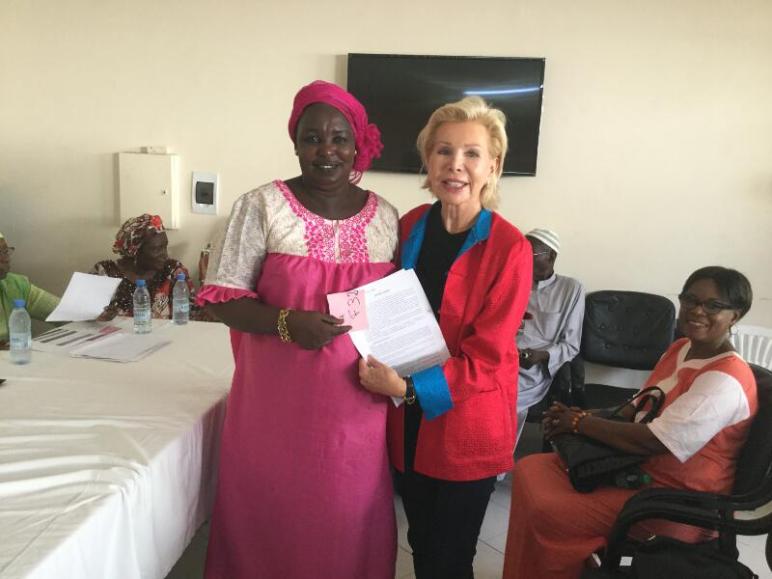 As a prelude to this lottery, a meeting was held in Baraka on 12 September 2017 between the YOU FONDATION, its partner HOPE’87 in Senegal, the Ministry of Town Planning represented by the President of the Steering Committee of the project « Cité Baraka » , the Town Hall of Sicap and the population of Baraka. This meeting was attended by Ambassador Ohoven, Mrs Claudia Jerger, Mrs Soumaré, and Mr Santhie Sene Agne, Mayor of Sicap Liberté.